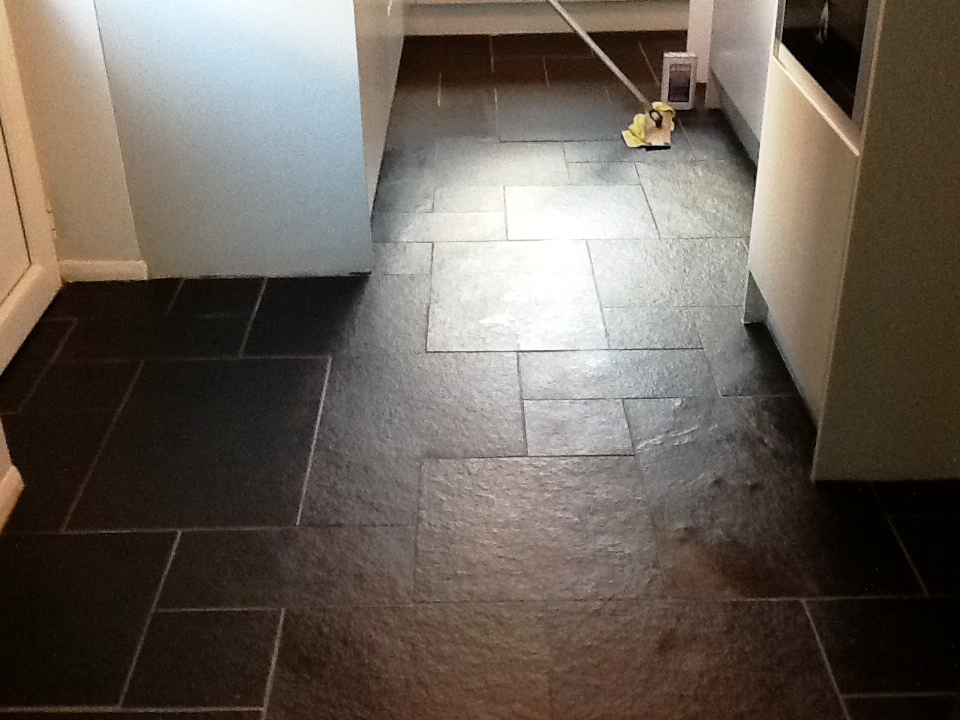 These pictures are off a brand new slate floor which the customer assumed would be much darker after she sealed it. Her builder had informed her that she only needed to give them a wipe over to remove the grout haze after he had laid them which she did before sealing however she was disappointed as they came up lighter and patchy than she had envisaged from what she had seen in the shop. The colour and patchiness was down to the fact that not all the grout had been removed and was now trapped between the tile and the new sealant.

To be able to remove the grout haze which was the root cause of the problem I would need to first remove the sealer. Fortunately we have a product called Tile Doctor Remove & Go which can do this so I applied it to the tiles, let is soak in for tem minutes and then scrubbed it into the Slate using a rotary machine fitted with a stripping pad. I then rinsed the floor with water and removed the soiled solution with a wet vacuum, repeating the scrubbing process where I felt it was necessary.

Once this was done I could deal with the Grout Haze by giving the tiles an Acid wash using Tile Doctors new Acid Gel product which being in a gel form is much easier to control. It was applied all over the floor and allowed to dwell for ten minutes to work on the grout haze, I then added a little water and worked the product in with a stiff scrubbing brush and a rotary machine to ensure all grout was removed from the surface of the tiles; the resultant slurry was then removed using the wet vacuum again.

It was important at this stage to ensure any trace of Remove and Go or Acid Gel was removed from the slate before sealing so I then gave the floor a thorough rinse with more water using the wet vacuum afterwards to remove as much moisture as possible. Before leaving for the evening I installed a fan to blow air across the surface of the tiles to assist in the drying process.

I returned the following day and did a small test patch on a spare tile the customer had with a colour sealant and she wanted it darker than the sealant alone could achieve as colour enhancing sealers will only ever slightly darken the colour. Therefore I suggested we apply Tile Doctor Stone Oil before sealing as this would darken the slate to the colour the customer was after and it works especially well on darker tiles. Once this was agreed I applied one coat of Tile Doctor Stone Oil, allowed an hour for the product to dry assisted by a fan followed by 2 coats of Tile Doctor Colour Grow to fully protect the tiles.

The job took two days, the grout haze is gone and the Slate now looks how it should, my customer was very pleased and left the following message on our feedback system.

Phil did an absolutely fantastic job on my black limestone tiles in my kitchen after my DIY botch job at trying to seal them. They now look like the floor I wanted to achieve when I bought those tiles in the 1st place. Thank you so much! Ms L. Whittaker.


Source: Dealing with Grout Haze on a Slate Tiled Floor in Northamptonshire