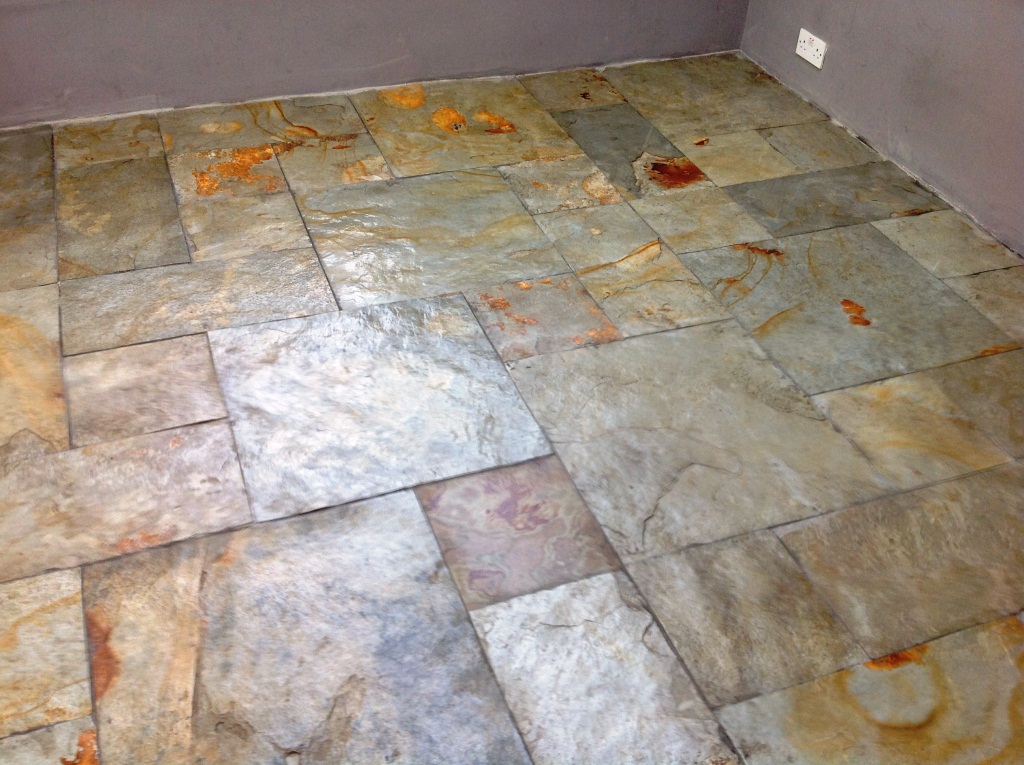 This property in Ulveston had previously been used as a guest house and was now being refurbished and turned back into a home. The kitchen and conservatory had a Slate tiled floor and as you can imagine had seen a fair amount of wear from the numerous fried breakfasts that had been prepared in there. The owners had decided to replace the kitchen but were keen to keep the slate floor however it was in a bad state and looked as if it had never been cleaned and sealed for some time.

I did a small test using Tile Doctor Remove and Go (which you can see in the photograph below) and it came up really well, naturally we were booked to come back and finish the rest of the floor which I had estimated would take two days.

Two weeks later I turned up at 9am as agreed and set up my equipment, the kitchen had already been removed so with the exception on the cooker little preparation was required. I worked in small areas using a high pressure spinner tool to remove as much dirt off the tiles as possible and a wet vacuum to remove the soiled water.

Stubborn areas were treated with Remove and Go and then I moved onto the next job which was to clean up the grout. For this I used a strong dilution of Tile Doctor Pro-Clean which is a alkaline tile and grout cleaner that is safe to use on natural stone. It was scrubbed in using a stiff brush and then rinsed off with clean water, again using the wet vacuum to remove the soiled solution. The floor was now clean but still damp so I tidied up my tools and left for the day.

The Next day I came back and inspected the floor to ensure it was dry and that I hadn’t missed anything. All was well so I started to seal the floor with five thin coats of Tile Doctor Seal and Go which is an ideal sealer for slate as it adds a nice subtle sheen to the tile and being water based there is no smell as it dries. The sealer was applied using a paint pad applicator and each coat took around about twenty minutes to dry.

When it was complete and the floor had dried I packed up my equipment and spent some time talking to the customer to check they were happy with the results (they were very happy) and to advise them on how to maintain the floor using with a neutral tile cleaner going forward which will help extend the life of the sealer.